I just noticed that I’ve used this post title two other times (as referenced by the addition of “-3” to the permalink of this post!)…well, so I’m a Go-Go’s fan. So sue me!

Earlier this month, Tim and I took a vacation to Vancouver, BC. Per our usual, we didn’t take many pictures. We always have grand plans of taking a bunch of pictures, then we’re too busy absorbing our surroundings and having fun to stop and take photos. But we did take a few!

We had such an amazing trip. That Sea to Sky Highway was an hour and forty-five minutes one way of us driving and gawking at the scenery. We thought about taking photos in the car, but knew they wouldn’t convey the majesty that we were seeing in front of us. Stunning.

We really didn’t want to come home and we’re making plans to return – once we go to Seattle, that is! I’m sure you’ve either seen the movie “The Bucket List” or have heard of the term “bucket list.”

My definition – and probably the definition that most people have for it – is a list of things to do before you die. Sounds morbid, but I look at it as a way to not forget all the things I want to do in my lifetime.

Go to Japan
I’ve always been intrigued with Japan. I love the culture, the history, the topography, the stark contrast of history versus cutting-edge technology, the food…the list goes on. Plus, most of the video games I love are Japanese. 🙂

It’s a dream that Tim and I both have, which makes the likelihood of this dream becoming a reality!

Leave the country before I turn 40.
Since I’m turning 39 in January (am I really that old?!), this one might happen sooner rather than later!

Technically I’ve been out of the country, but I don’t count the time back in 1994 when at a conference in Detroit, we were heading out to dinner and instead of turning right on a particular street, our driver turned left. We ended up in Windsor, Canada just long enough to turn around and go back into Detroit. So, the less-than-three minutes I was in Canada doesn’t really count. Besides, this was pre-9/11 and you didn’t need a passport to move between the US and Canada!

We’re planning on going somewhere in the Caribbean next winter, so that counts! I suppose we should get those passports before then… 😉

Learn to surf.
I’ve always wanted to learn how to surf. It just seems so awesome and relaxing and physically demanding all at the same time! It’s hard to explain, but perhaps it’s something that a Midwestern-born girl who always dreamed of the beach is destined to do! 🙂

Also, since we’re planning on that Caribbean vacation, I might just get that chance!

Dip my toe in every ocean.
With my desire to travel the world, this one should naturally fall into place. It’s shocking to think, but I haven’t dipped my toe in ONE ocean, much less all five of them!

The only one I can see ever having trouble with is the Southern Ocean, as I don’t plan on going to Antarctica anytime soon. 😉

Complete a half marathon with an 11 min/mi.
Since my injury earlier this year, I have really slowed down in my running. I also had to drop out of the half marathon I planned on running. Last year, when I did my first half marathon, I ran it in a 12:30 min/mi. This was partially because I hadn’t trained properly (my longest run prior to the race was 10mi) and partially because I wasn’t as knowledgeable about pacing myself and I ran too fast in the beginning, which sapped me of energy by the end of the race. Adrenaline can only take you so far in a race!

The goal of not only doing another half marathon but doing it faster fits with my overall goal of becoming a faster runner. I’m not built like a typical runner, but that’s not going to stop me! 🙂 I’m new at this content-driven, socially focused blogging thing. Oh, I’ve had a blog for years, but nothing that had a purpose like Health Kitten.

I’m so new at this that I forgot to mention that Tim and I were heading out of town for a long weekend to the in-laws. Which also meant, I was going on a technology vacation. Which meant no new posts on Health Kitten!

When I travel, I do take the cell phone, laptop and other such electronic devices, but I rarely use them. I don’t check work emails or voice mails; when I go on vacation, I just tell work that I’m not checking those things when I’m gone.

It’s sad that so many people don’t take vacation as a time to truly go on a vacation. I used to work for a guy who was so addicted to his Blackberry and being connected 24-7. His wife planned vacations for them specifically to places where they had little to no connectivity to try and force him to take a break. It worked sometimes.

How do you handle technology when you take a vacation? Is it surgically connected to you or do you unplug completely?

Now that I’m back and digging out of the email Hole of Doom™, I won’t have time to research and write a post for Wacky Gadget Wednesday. One would think I would’ve planned ahead for this, but no, still too new at this! 🙂

Today’s the first day back from work since we had a 4-day vacation to northern Minnesota. Five other couples plus Tim and I rented this HUGE house on the lake and had the most wonderful time.

And now begins the vacation hangover! Too much food (oh god, the food!) and too much drink makes Carolyn weigh more than she did before the vacation. I can only imagine how much more it would’ve been had I not gone running and kayaking every day! 🙂

After much deliberation, I rejoined Weight Watchers because of their new PointsPlus plan since now they emphasize REAL food instead of fake food full of chemicals and artificial sweeteners.

What I need most from an eating change (a.k.a. “not a diet”) is to eat better foods in better portions. Yes, I know deep down what I need to do, I just need a jump start to moving in the right direction to tell me what I should eat and what I shouldn’t. Having that information in an easy to digest format that I can reference – rather than obsess over food all day – will help me reset my eating habits. I figure if I stick with it until I get halfway to my goal weight, I should be good.

I’m also going to push to a goal of 30 minutes of exercise a day by the end of the month; that could be running, PT, walking, and so on. I think I can do it! I also need to re-embrace the treadmill, since the weather is going downhill towards winter. There’s also that pesky 10k the end of October that I need to deal with!

I’m working on a post for tomorrow that will lay out the plan I have for the food and cooking part of the blog. Can’t wait for you to read it! 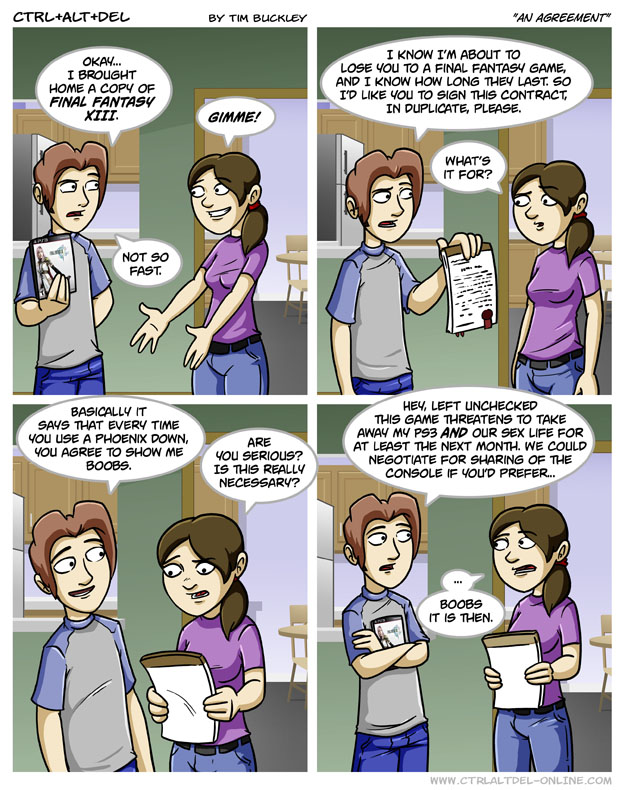 I’m surprised Tim didn’t present me with this last night when he got home from class. He was surprised that I wasn’t planted on the couch playing the game (at that point, I hadn’t even cracked the plastic wrap on the case). But, I had just spent 3 hours editing the audio nightmare that was SnarkFu (Skype was being a hoar and J’s audio quality went to crap…had to do a lot of cutting/splicing to make a coherent show) and finally, after I exported the Soundbooth file to mp3 at around 10pm, I decided I would finish up the tagging/uploading tonight after volleyball and get in some FFXIII time before bed.

I usually have a problem with a new battle system in the JRPGs I play. I usually hate it for about the first 5-10 hours until I get the hang of it, but this one I’m loving right off the bat. It took the good parts of the battle system from FFXII and FFX-2 and combined them into a great battle system. Granted, I only put about 30 minutes into it (right around the time when you get control of Snow), but I’m so looking forward to more!

Today’s my last day of work before I take a week off. I have the office remodel, a sports massage on Friday, the Aquabats on Saturday and the Auto Show (with brunch!) on Sunday. Going to be awesome!

Why I didn’t fall asleep last night until nearly 1am, it’s beyond me. Regardless, my best friend today is coffee. I meant to do my list of things I want to do in 2009 yesterday, but I was so tired from NYE, all I did was sit on the couch and veg out to home improvement shows. As a result, I started measuring out my kitchen and playing around with the kitchen builder tool from Ikea to get a rough layout/approximate cost for redoing the kitchen. I think we’ll be able to do new cabinets, counters, sink, etc. in the kitchen (I’d keep my existing appliances) in addition to putting in hardwood floors on the first floor and upgrading the doors/trim on the first floor for under $6k. Not too shabby. All labor to be done by me and my family – but that’s what’s awesome about doing projects like these. Once we do it, I’m going to take 1 or 2 weeks off work to devote to the project. Might not be until next year, but I like to plan ahead. Far ahead.

On the more immediate home improvements, on my list of things to do this year is to maximize the storage and layout of the garage. We want to pick up a small chest freezer to supplement our space in the fridge’s freezer and I want to design some drop-down ceiling shelving to put little used items on, thus freeing up space on the existing shelving for more items that are currently on the floor. I’m looking forward to this particular project.

The next item on my list is the perennial “run a 10k” item. Body injuries notwithstanding, I plan on doing this one. Hopefully my body will cooperate.

Also, I want to take a real vacation with Tim this year. We’re looking into going to San Francisco in May or when Tim’s done with school, depending on the timing. I love visiting his family, but there’s a time when I want to go somewhere new and just spend time together. If it’s just a trip to the North Shore instead of the SF jaunt, that would be fine too. I just want to go somewhere new and have a real vacation for a change. Which would be good, considering I just saw my PTO time for this year: nearly 6 weeks! Wow. I know I have time!

As always, there’s the annual “get healthy” and “pay off debt” goals – which will be an ongoing process. All in all, a pretty good outlook for 2009!

Hope you all had a great New Year’s and here’s to a fantastic 2009!