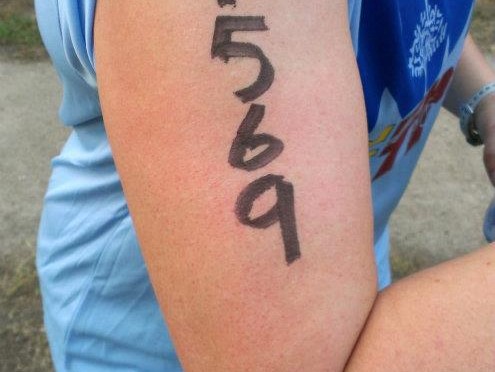 Note: I’m slow. Really slow. I know this. But my goal was to finish and not kill myself.

It was so hot and humid – even at 6:30am – I was sweating buckets just standing there. I was really glad I had the foresight to set up 5-1L bottles of water in my transition station/bike and had 4 Gu packs and one of the bottles of water with a Gu electrolyte tablet for the bike ride. Saved my butt.

What didn’t save my butt was the swim. Dear gawd that sucked. Let’s just say it felt WAY longer than a quarter mile. But, I only got kicked once! Go me!

I was already a full 3 minutes off pace! That must’ve made me hustle, because my T1 time was 1:59! Woot! I give credit to my sockless Keen bike shoes. Quick on/off.

The biking was awesome. I wanted to just go out and crush those 12 miles, but I held back because I knew I had a 5k ahead of me after the bike and if I blew out my legs now, I wouldn’t be able to run. But damn that was so difficult to do!

A note: halfway through this bike leg – which went through rolling hills that meant a lot of shifting gears – was a MONSTER Category 5 hill. I went and scoped it out the day before, and it was ~0.6mi long…and STEEP. Yikes.

Speaking of shifting, my chain fell off my bike on a nice, flat straightaway!!! I wanted to go faster than the 20mph I was managing on my middle ring, so in my enthusiasm, I shifted to the big ring too fast and my chain fell right off.

I had to do some quick side-of-the-road bike repair, getting covered in chain grease in the process. I think it took all of 2-3 minutes to fix it, but that and the loss of momentum really wrecked my time for a good 5-6 minutes.

Back to the recap. When I got to the monster hill, I went up approximately a quarter of it, then I said “fuck this” and got off and walked the bike up the rest of the way. The funny thing is that my walking was only a tenth of a mph slower than my biking speed. Plus, my legs got a much-needed stretching out. The rest of the ride, other than me passing a bunch of people, was uneventful. Time: 51:42.

The run! By then the sun was scorching and the heat index was well into the 90s. I had a bottle of water that I froze the night before and by the time of the run had melted, but was still cool. Between that and the water stops, I dumped more water on my head and neck than I ingested (I did empty two bottles of water on the bike, though, so I was hydrated). My plan was to run for 1:30-2:00 minutes and walk for 30 seconds and it was the best decision I made as I was passing a lot of other people who just ran out of gas and could only manage a walk.

I was TIRED. Really tired.

Just shy of 4 minutes slower than my guess – and if I hadn’t lost the chain on my bike, I would’ve beat that time. But since my goal was to finish: mission accomplished.

Also, I wasn’t last! I beat eight other people! 🙂

Now I can check it off my list and not have to do one ever again. Unless I do a team tri where I can do the bike (preferred) or run leg. Otherwise, I’m going to stick to running.

My nephew told my husband a story this weekend about a friend of his that rides quads (a four-wheel off road vehicle) who is immensely talented and races semi-pro, however, he also has MS. When asked why he still rides, my nephew said “it’s because one day, he won’t be able to and he wants to do it while he still can.”

It’s similar to why I do these things: to not only prove to myself that I can, but because I can. There’ll be a time when I’m unable to do these things and I don’t want to have any regrets as to the things I should’ve done when I had the chance.

Next up: half-marathon training!